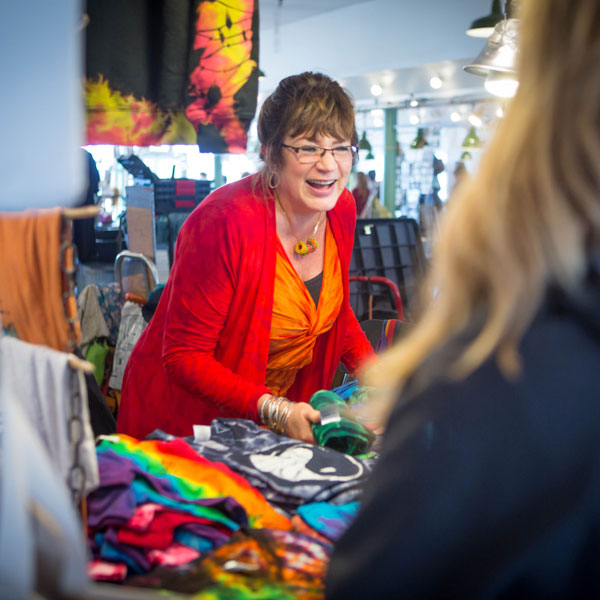 The Mother of the Market

Sharon Shaw’s love for Pike Place Market stretches back 32 years. It was then, while in her early 20s, that she took every opportunity available to escape the offices of her corporate property-management job and wander through the Market. It was there that she found a vibrancy and sense of community that was a world away from her day job.

It didn’t take long for Shaw to strike up friendships with the vendors, and she even turned down a job offer from Mike Ruegamer, the owner of Cinnamon Works Bakery. Then an unexpected thing happened: “It was one of those days when you’re so fed up with your job that you just can’t stand it,” she recalls now. Ruegamer again offered her a job. But this time she accepted.

Soon after beginning work at the bakery, Shaw met her husband-to-be, Michael, who was also working at Pike Place, and in 1990 the couple started their own craft line for the Market: handmaking stained-glass kaleidoscopes. The two quit their full-time jobs to focus exclusively on the new business. They joined the Pike Place art community—and also started a family of their own. “As babies, [our two boys] were [at the Market] every time I was there. They would take naps under the table,” Sharon recalls. From the beginning, Sharon understood the challenges of building a life at Pike Place Market. It requires hard work and a strong commitment, she says, but it also has tremendous rewards. “It’s such a tight-knit community. We’re like a family. We take care of each other and we look out for each other. There’s a closeness, I think, that isn’t in any other work environment.”

These Market community bonds were put to the test in early 2004 when the son of another artist at the Market was hit by a car on his way to school. The family would need to be at home and in hospitals, and unable to work at the Market until further notice. So Shaw stepped in to organize a large fundraiser in support of the family. “We raised so much money for them. It was amazing,” she recalls.

It was the beginning of a new Market tradition. Any time someone in the Market was having a tough time, Shaw organized the community to provide support—whether it was helping a merchant pay medical bill, or cover mortgage or pay rent. “Sometimes it would be just a matter of passing the hat,” Shaw explains.

Shaw would take a paper bag and start walking around, explaining that someone in the community had been in an accident and needed financial support. “Many times it would just be one dollar or five dollars from each person. . . . within two or three hours, I would have seven, eight hundred to a thousand dollars in this bag that I’d be able to hand to someone because they were in trouble. Other times, it would be devastating enough that we would need to raise thousands, and we would have a big auction for them.

Meanwhile, the Pike Place Market Foundation had created two relief funds of its own. In 1992 the Foundation developed the Emergency Rent Fund to help support Market residents, most of whom are low-income seniors, to help with a deposit and first month’s rent to access housing. And in 1999 the Foundation established the Farmer Relief Fund to help farmers recover from natural disasters and other emergencies. In 2013 the Foundation voted to combine its emergency relief funds with Sharon Shaw’s community-supported, “pass-the-hat” efforts. The Market Community Safety Net was the result. It now serves as a support during difficult times for the entire Market community, from farmers and merchants to artists and residents.

The Market Safety Net has helped hundreds of individuals—a testament to the Market community’s enduring resilience during tough times. After longtime Market artist Sandi Schmidt’s husband passed away and she needed major surgery only a year later, the Safety Net helped. Emery Carl, one of the Market’s most recognizable buskers, faced declining tips due to the waning cash-carrying society, and when he was gripped by a dental emergency, the Safety Net was there to help. Sandi Schmidt, a recipient of the Community Safety Fund, at her craft table

Shaw is still at the forefront of the Market’s fundraising efforts. For the past three years, alongside fellow Market artist Miranda Marks, she has devoted countless hours to organizing an annual benefit event, Behind the Table, to help grow the Safety Net. Beyond the more than $23,000 raised during this year’s event, the benefit also raises community awareness about the fact that a Safety Net exists.

The money raised is real proof of the community that Shaw felt when she would wander the Market three decades ago. Since then she has been a tireless advocate for the people of Pike Place Market and an integral part of that family, helping it to grow bigger and stronger every day.

It is not surprising, then, that somewhere along the way Shaw was given the name the Mother of the Market. “Because I was helping so many people, I got nicknamed Mama,” Shaw says with a laugh. “I guess it’s just because your mom is the one you go to.” Last year Pike Place Market Foundation granted $34,122 in emergency assistance to help 60 members of the Market community secure or maintain their housing and livelihood. Help support the Market you love to ensure it remains a thriving, caring community. Donate now at pikeplacemarketfoundation.org.