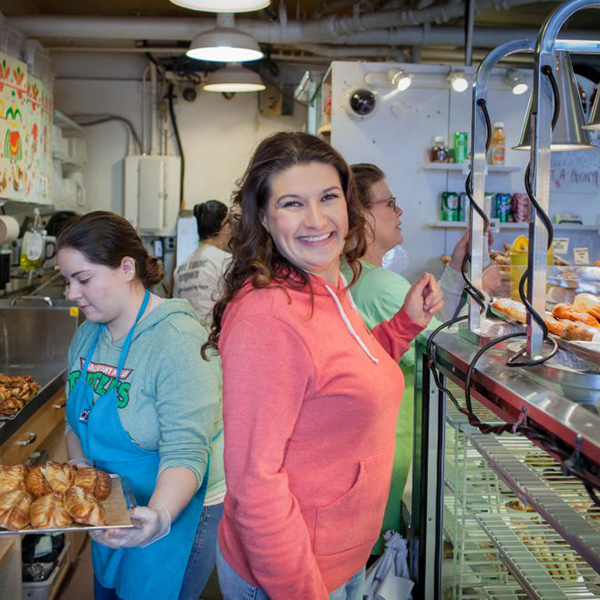 Meet Olga Sagan, of Piroshsky Piroshsky: the traditional old-world Russian-style bakery with a long history of mutual support with the Market community.

Piroshsky Piroshky was founded in 1992 by Estonian immigrants Vladimir and Zina Kotelnikov. “He was a baker, and she was an attorney,” Olga tells us. They faced a new life in a new country, and their mutual friends found a spot in Pike Place Market to bring a taste of Eastern Europe to the Pacific Northwest. “Their biggest supporters were the Market vendors and recent immigrant community, she says. Olga Sagan has been with the bakery since 2001, becoming a half partner five years later, and the sole owner in 2017.

Under Olga’s leadership, Piroshky continued to expand locations and partnerships. But the COVID-19 pandemic was a whole different test. “Seeing our sales go down 90% in one night… It was shocking and unprecedented,” recalls Olga. The Piroshky team used their time during the lockdown to innovate, doubling down on their digital presence and building delivery service.

“It’s nice to have a whole new arm of the business that did not exist before,” said Olga. “It not only allowed us to recover, but to grow.” Piroshky Piroshky now delivers locally as well as nationally, stretching service as far north as far as Anchorage, and as far south as Texas. In addition to challenges from the pandemic, Olga recently had to navigate misplaced backlash and threats due to Piroshky’s Russian heritage.

Olga made Piroshky’s position clear in a recent message to her employees and customers, saying: “What is happening in Ukraine today is both horrifying and unacceptable.” Olga is the only staff member from Russia, she immigrated as a teenager and is an American citizen. Three others on her staff are from Ukraine.

“Russian-speaking people, including our own, are against the Russian President’s military actions in Ukraine,” she reiterated. ”Our hearts are hurting, and we stand very strongly supporting peace and unity.”

Nevertheless, she reiterates that the love of their supporters drowns out these few negative comments.  “In my experience, Seattle is very supportive of small businesses and immigrants,” says Olga. “I feel lucky to be a part of a place that embraces differences. I am blessed with the employees and our community.”

In addition to preserving Piroshky’s traditional spirit and flavor, Olga is also committed to giving back to the community that bolstered the bakery from the start. “I think Pike Place Market is so much more than people think,” reflects Olga. “It’s a whole ecosystem, including community and healthcare services.”

Piroshky Piroshky donates daily to the Pike Market Food Bank and contributes to the Market Community Safety Net: the Market Foundation’s relief fund to support those who fall on hard times and need a helping hand. “I want people to know the Market isn’t just a destination, it is a community of support. When you shop in the Market, you support small businesses and the people. As Piroshky celebrates their 30th anniversary this year, Olga is excited for what the future has in store. “We are looking forward to another 30 years. We are very proud,” she says. “If not for the Market, we would not be where we are today. We are thankful to the people who fought and cared for the Market.”