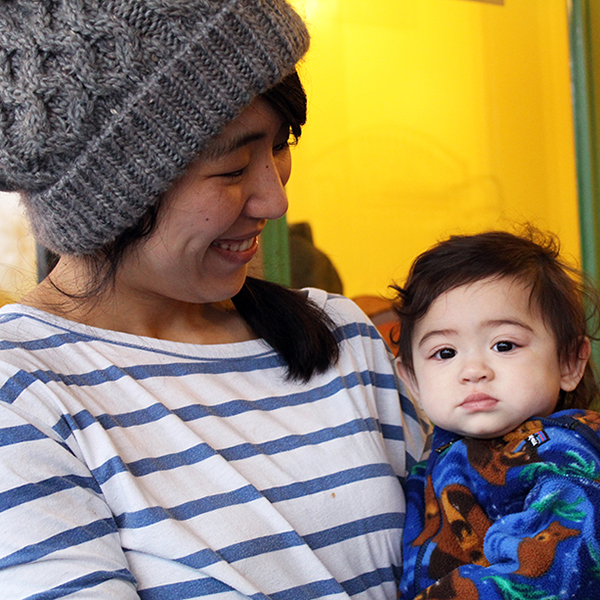 Pike Market Childcare & Preschool provides high-quality childcare for families of all income levels. It’s highly sought-after by many families, and typically there’s a waiting list to get in. In keeping with the Preschool’s mission to care for families who work and live in Pike Place Market, Market employees receive priority admission to the Preschool.

With two full-time jobs, Noriko and Justin needed to find care for Olivia during the week. Noriko looked at many childcare options nearby Pike Place Market but nothing compared to what she observed at the Pike Market Preschool when she and Justin took a tour. After the tour the couple filled out the required paperwork and the very next day they received a call bearing the good news: Olivia had secured the last available spot in the program.

Olivia was five months old in September 2014 when she was enrolled in the Sweet Peas. Now, at age 2, Olivia spends three days each week learning, growing, and bonding with her six other classmates at a rate that amazes her parents. Noriko and Justin have been a part of the Market community for over a decade, and their connection to the Market has only deepened since Olivia started at the Preschool.

For Justin, the sense that he belonged to a community was immediate upon Olivia’s enrollment: “Working in the Market for ten years, it starts to feel like a small town. When I became a parent [at the Preschool] I immediately recognized several other parents as regular [Michou] customers. It’s a nice feeling,” said Justin.

Since spending hours each week alongside other babies, Olivia has grown tremendously, both mentally and emotionally. “Within her first week of being there, she was crawling,” said Justin. “When she sees other babies crawling, eating solid foods … She does it too. It’s so important for her to be around babies her age right now.”

Noriko gets to see Olivia each time the teachers take her daughter’s class on a walk through the Market. “The teachers always bring them by the store, and they wave and say, ‘Hi, Mom!’” says Noriko. And if Olivia gets sick and needs to be taken home, Mom is just a two minute walk away.