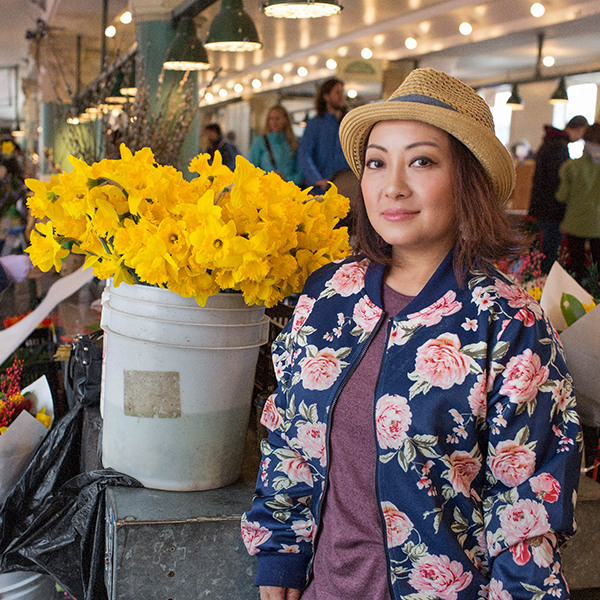 “Mom’s technically retired, but she’s still on the farm every day,” Scott Chang says as he skillfully arranges a bouquet of brilliant yellow daffodils at his family’s flower stall in Pike Place Market. “If not on the farm, she’s here [at the Market].” In this regard, the apple doesn’t fall far from the tree—along with his mother Chue Chang, 32-year-old Scott is the face of See Lee Farm, tackling everything from weeding peony beds and harvesting tulips to driving the flower delivery van and selling the season’s freshest arrangements at the Market.

Scott grew up at the Market, but for Chue Chang, the journey to Pike Place wasn’t easy. As the youngest and only daughter of seven siblings, she was born to a family of farmers in Laos, where her days on the family farm began at dawn. Farming was ingrained in her. So it was a shock in 1980 when Chue and her husband moved to the United States as refugees and could only find work as a fish cleaner on Seattle’s waterfront, and later as a seamstress.

The Indochinese Farm Project was Chue’s saving grace. Funded in part by King County and the Pike Place Market Preservation and Development Authority (Market PDA), the Project empowered Hmong refugees to be self-sufficient. In 1983, Chue and her husband, along with a handful of other refugee families, received a 5-acre plot of farmland in Woodinville to establish their livelihood. Within a few years, the couple had built a flourishing farm and began selling produce at local farmers markets—and in 1986, they set up shop at Pike Place Market. 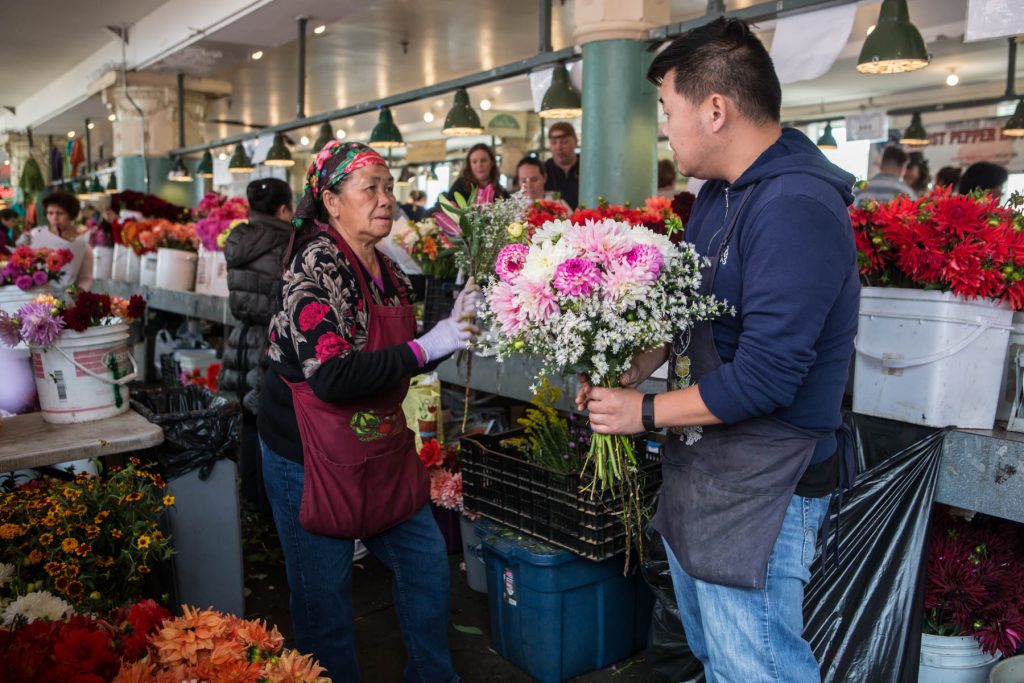 Specializing in vegetables to start, the family soon saw an opportunity to enter the flower business. “A lot of the flower farmers [at the Market] were retiring and no one was taking their place,” Scott says.

By 2006, See Lee Farm operated two additional plots in Fall City, where they grew approximately 50 varieties of flowers. Scott was 21 years old and fully immersed in the day-to-day routines of the business. But disaster struck that November with the massive flooding of Snoqualmie River, which obliterated everything in its path. “The river dumped two feet of sand across one farm, burying everything we planted,” Scott recalls. “The other farm was the polar opposite. The fast waters tore through the soil and took nearly all of our tulip bulbs. All that was left were exposed peony bulbs that clung to the ground and large rocks carried from the neighboring property.”

By then, Hmong-run flower farms filled the region, and many of the farmers’ livelihoods were on the line. Fortunately, the Community Safety Net at Pike Place Market was there to catch their fall. Funded by the Pike Place Market Foundation, small grants up to $1,500 are available for farmers, artists and low-income residents when disaster strikes. Last year alone, $34,122 was distributed throughout the Market community. “It helped out tremendously,” Scott recalls. 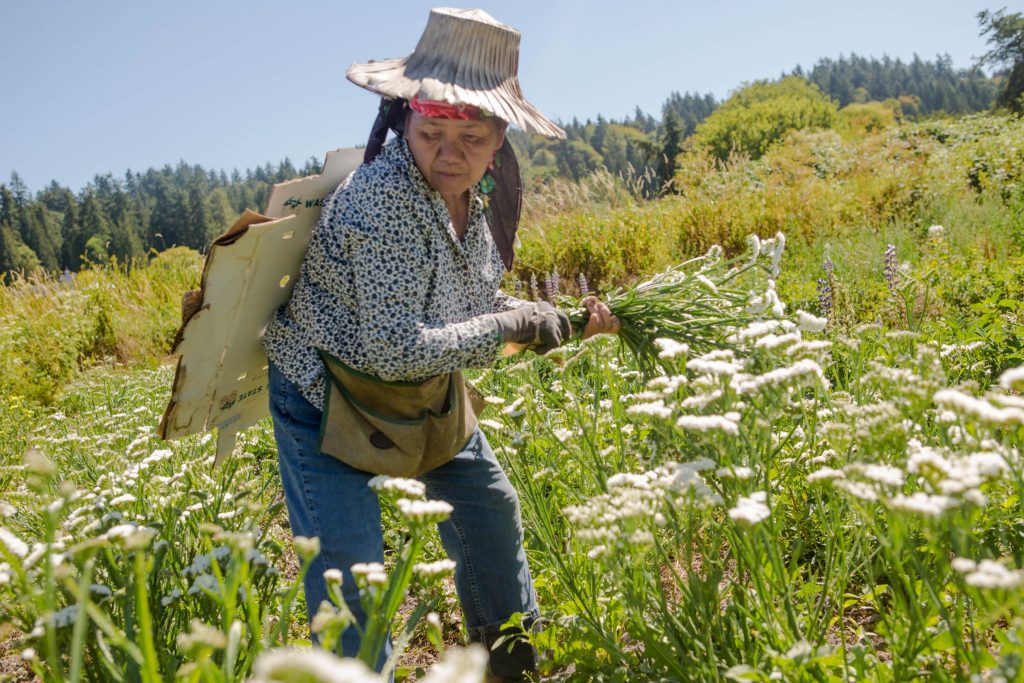 Thanks to the generosity of the Market community, Thai Thao Farm also recovered from the natural disaster—with resiliency and an eye to the future. As part of the younger generation of Pike Place flower farmers, 37-year-old Lue Eng is on her way to taking over the family business, which operates out of Woodinville and Duvall. Lue emigrated with her family from Thailand to the United States in 1980, but it wasn’t until she was 11 years old that she began interacting with customers amid the hustle and bustle of the Market. “My mom relies on me a lot to communicate with the customers … because English is her second language,” Lue says.

Lue has helped modernize the family business, adapting to changing demand and providing value-added services like wedding flower consultation. A budding florist with an entrepreneurial spirit, Lue attends vendor workshops led by the Market PDA’s farm team to learn about topics like marketing, sales, and the digital world. 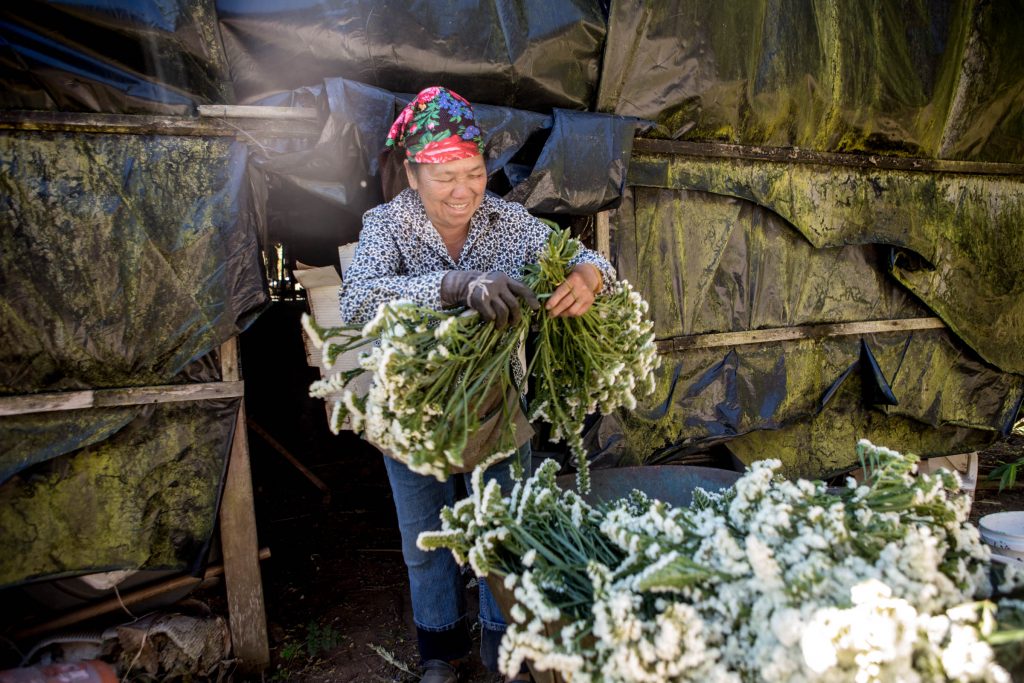 Chue Chang hangs bundles in the hot house to dry.

For Lue Eng, Scott Chang, and the Market’s 40 other flower vendors, family ties are vital. And although business booms during the spring and summer when fresh flowers are at their peak, Mother’s Day weekend is always the busiest time. The vendors are currently preparing for the Market PDA’s annual Pike Place Market Flower Festival on May 13 and 14—a lively celebration of family, community, and seasonal blooms that is now in its ninth year. It’s a celebration that carries many vendors through the spring and into the summer months. “It’s jam packed,” Scott says. “Our relatives come from out of town to help Mom. It’s like a family reunion.”

Whether arranging bouquets, tending the farm, or interacting with customers, the flower farmers of Pike Place Market are linked by the common thread of perseverance. Their long days and long journeys add to the Market’s vibrancy and to each family’s ongoing success in the face of adversity. “I realize this is a lot of hard work, but the work you put in is what you get out,” Scott says. “Talk to any one of us [farmers] and we can tell you what’s going on at the farm right now, what’s coming up the next week, and what’s phasing out. … Even though we’re so large, we’re still a small market at heart.”

This story was written by Talia Shapiro and originally publish by Seattle Weekly. The photography was done by Rosemary Dia Ross. You can view the original story here.