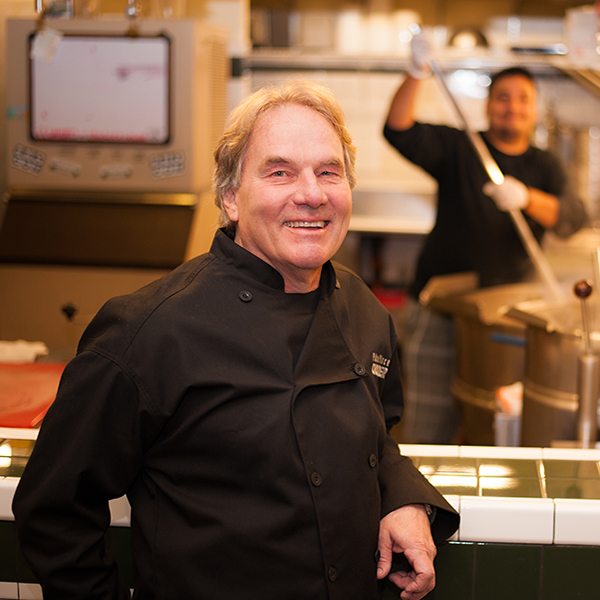 Larry Mellum has been making seafood chowder in the Pacific Northwest since 1991. When he decided to compete in Rhode Island’s Great Chowder Cook-off in 2000, the odds of winning didn’t look likely; in 20 years, no restaurant outside New England had ever won first place. Nevertheless, his now-famous chowder went on to win first place three years in a row. It was then that Larry decided to expand his business beyond a small café in West Seattle.

“My first thought was: I want to be at Pike Place Market,” says Larry, and Larry opened Pike Place Chowder in 2003. “To this day, I’m so grateful we moved our business here. Every day I can select from the freshest produce and fish for my chowders, and this enables us to continue to perfect our recipe. Where else in Seattle can you have millions of people from all over the world come by and sample your products?”

Pike Place Chowder’s combination of award-winning chowder recipes, quality ingredients and dedicated staff have made it one of the most popular restaurants in the Market. “Every morning, we will have a line of people that will extend all the way up Post Alley to Pine Street,” says Larry. “It is a humbling experience to see that.”

Larry shares that success with the Market community by supporting our community. He has been an avid donor to The Market Foundation since 2004, and most recently, Larry now donates a portion of his famous chowder sales to us too. “The Market Foundation does such important work for vulnerable seniors and others in the Market, I can think of nothing better than to give right back to the place that has given so much to me and my business.”

Thank you, Larry, for supporting a thriving, caring community at Pike Place Market!