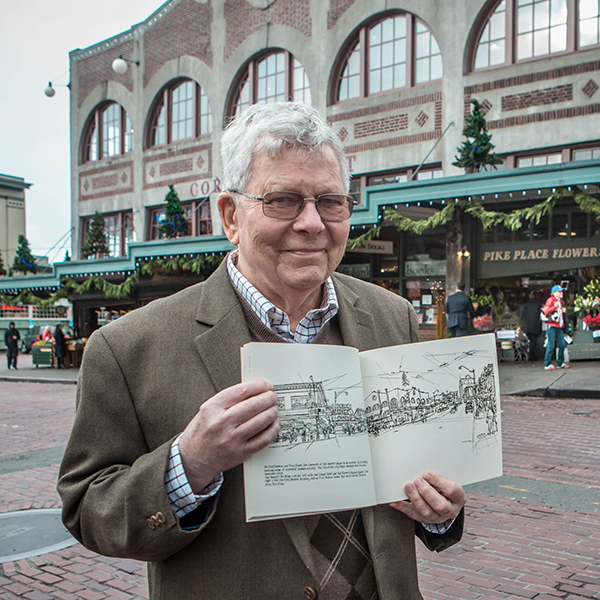 Jerry Thonn, Friends of the Market

The People Who Saved Pike Place Market
Nearly 50 years ago, the municipal treasure was almost dismantled—until Seattle’s citizens stepped in to protect it for generations to come.

Beneath the hustle and bustle of Pike Place Market, beyond its picture-perfect marquee, sits a checkered past. During its heyday in the early 1900s, the thriving marketplace attracted hundreds of farmers every year, but by the ’60s its structure and integrity had waned, and the City of Seattle had set its sights on Pike Place for a grand urban-renewal project. The Market had deteriorated and gentrification was ready to intervene. This wouldn’t be the last time the people of Seattle banded together to preserve the historical site, but it was certainly the most dire.

As the threat to the Market grew, supporters came together. Jerry Thonn, a young lawyer and the president of Allied Arts of Seattle, joined University of Washington architect Victor Steinbrueck and a small group of advocates to establish the Friends of the Market to protect what they saw as a municipal treasure from bulldozers and big money.

Now 84, Thonn remembers that rough period in the Market’s history, when the urban-renewal project was gaining momentum. Behind claims that the Market was suffering from “urban blight,” the City devised a grandiose plan to tear it down and build three 19-story multipurpose buildings, a 29-story hotel, and a 4,000-car garage. “Everybody knew that the City was coming and the City was going to take ownership, and once that happens, people stop repairing. They weren’t repairing their countertops; they weren’t repairing their refrigeration units. Things were kind of sliding downhill,” Thonn recalls.

Despite its state of disrepair, Pike Place Market was still a bustling center of commerce, attracting people of every class and race. “Those were the lively days of the Market,” Thonn says. “It was the poor and the middle class and the wealthy. Everybody shopped and enjoyed the Market. It was a very human place.”

The Friends of the Market and an army of volunteers went door-to-door gathering signatures to support an initiative to protect Pike Place Market as a historical district. But even with the support of thousands of citizens, the Friends’ grassroots campaign faced many challenges. It was short on money, and the local television stations and newspapers were all campaigning for urban renewal. “Everybody was against the initiative except for the people,” Thonn explains. So it was somewhat of a surprise when the ballot results came in and, against all odds, Seattle had voted to save the Market.

The Friends of the Market had achieved their mission, and renovations began. “The original rehabilitation was a big job, but … we did it with the minimum amount of disruption, and the maximum effort to keep [the Market] in the traditional fashion,” Thonn explains. And the people from the downtown business district who thought the Market was such a wreck? “Now, you’d think they invented it. It suddenly became the major attraction of downtown Seattle.”

Fast-forward to today, and Seattle is the only city in the nation to preserve and operate its public market continuously for more than 100 years. With a new MarketFront expansion in progress, it’s clear that the perseverance and continued support of the Market community is the reason it still stands.

Although it never again faced demolition, the Market needed another round of renovations in the 1980s, and again the community stepped in to support the improvements with donations; each of the 55,000 tiles covering the Market floor contains the name of someone who contributed. And now community members are helping again, this time in support of the new MarketFront expansion. Donors’ personalized Market Charms will be suspended from the outer railing and Bronze Hoofprints will be embedded on the MarketFront Plaza when it opens to the public next year.

For people like Sandy Moening, supporting Pike Place is deeply personal. An original tile donor in 1983 and now a proud Market Charm donor, Moening fell in love with the Market more than 40 years ago. In the early ’80s, Moening worked at a bank downtown, and she and her colleagues walked to the Market every day for lunch, she recalls. It was a mile each way (uphill on the return), and they were frequently late getting back. So Moening began bringing Market treats back for her boss, to appease her and was able to keep the Pike Place lunchtime tradition alive. “I really love the memories I have,” Moening says. “Of all the things in Seattle, this is my Market. … It’s a part of my life and it’s a part of my history.”

Back in the ’60s, Jerry Thonn and the Friends of the Market began a journey to preserve the Market’s structure and its distinct charm—for the people, by the people. And clearly, it worked. “You walk along the main arcade and there are merchants to talk to. There’s somebody offering you a slice of apple. There’s somebody offering you a piece of cheese. It’s a homey kind of place. A real place. It still is maintaining that character,” Thonn says. “I get a warm feeling, even on a cold day.”

Help grow the Market you love and be part of Market history by writing your family name into Pike Place Market at PikeUp.org.