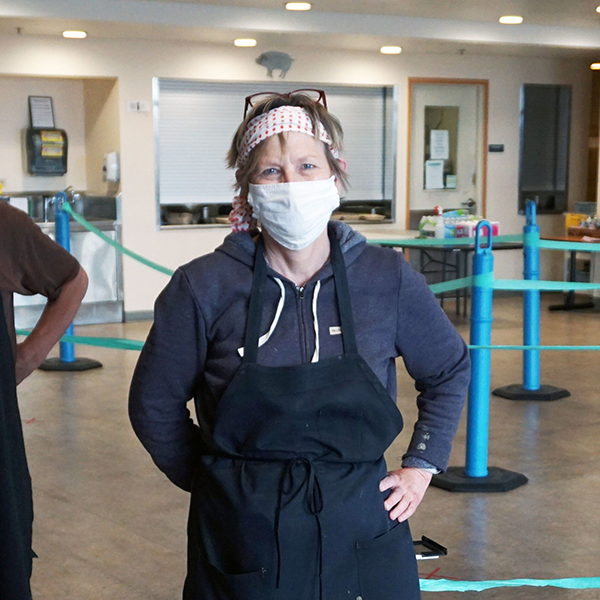 Jeannie Falls must have been destined to work in Pike Place Market, given her mother’s legacy of advocacy and devotion to preserve it.

Jeannie’s mother Jean Burch Falls was a fierce supporter of Seattle arts and culture, serving on the first Market Preservation and Development Authority after the historic district was saved in 1971. In the early 1980’s, Jean played a key role in recognizing the need for social service funding and subsequently establishing the Pike Place Market Foundation. Jeannie remembers, “Mom happened to be there when the papers needed to be signed, and went down in history as the founding member of the Market Foundation!” Jean also raised funds for some of the Market Foundation’s first capital projects, like the Pike Market Child Care and Preschool‘s first playground.

Jeannie’s sister Zan also has strong ties to the Market. She was the first paid employee at Sur La Table when Shirley Collins founded the iconic kitchen and dining store in 1972 (In opening her business, Shirley was the first woman in the state of Washington to apply for a bank loan on her own), Zan worked in the Market for many years and both of her kids attended the Preschool. Jeannie remembers standing outside Husky football games handing out “Save the Market” leaflets as a teenager, thus beginning her own journey and love of Pike Place Market. Though her previous career was in events management, she was always looking for ways to help support.

“I really hoped I could volunteer at the Market to cook at the Senior Center,” says Jeannie. But Zoë Freeman, who has worked at the Senior Center for over 30 years, had other ideas in mind. “In the way only Zoë can, she saw my experience with events as a perfect way to help with Figgy Pudding!” laughs Jeannie.

Jeannie joyfully volunteered in helping produce Seattle’s favorite annual caroling competition for almost 15 years before she switched careers and landed a full-time role as the Senior Center’s Operations Manager. The next year in 2010, she was asked to move into the Executive Director role of the Pike Market Senior Center & Food Bank. “It’s a gift to get a whole new career in your 50s,” said Jeannie. “It’s a whole new chapter in my life and I keep learning. The staff were amazing in helping me get up to speed.” The Senior Center and Food Bank have more than tripled the budget since 2011, expanding programs and pivoting to meet emergent needs in the Market community.

Because of their nimble approach and ability to listen to their client’s needs, Jeannie and her staff were able to spring into action when COVID hit. “There weren’t as many meal programs in Seattle open because of the COVID risk, almost everything closed down,” said Jeannie. In response, the Pike Market Senior Center stayed open, expanded meal offerings, adding dinner to-go in addition to hot breakfast and lunch. “And I finally got to be the cook!” Jeannie says with delight. “It took me a while to get there, but I was cooking two days a week at that time so we had coverage.” The Food Bank was also able to meet the emerging needs of seniors and at-risk clients sheltering at home by expanding their delivery program. In close coordination with The Market Commons staff, their team was able to increase at-home food deliveries for vulnerable neighbors in Market housing and surrounding buildings. “If we have to do it all ourselves, our capacity is limited,” says Jeannie. “but with partnerships, we can focus on what we are good at and we are able to serve so many more people.”

Looking toward the future, Jeannie is hopeful. “What we have in the Market is a strong model for creating a healthy community, and that was proven during COVID.” She reflects, “Seniors living in affordable housing, a food access program for them, a senior center, people working here who are able to craft a living with childcare to support them… The Market is a marvelous microcosm, a supportive community.”