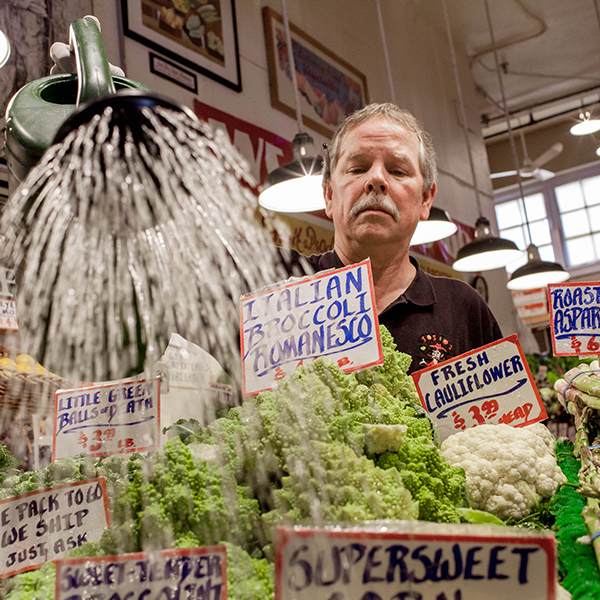 For Mike Osborn, co-owner of Pike Place Market’s iconic Sosio’s Fruit and Produce, the Market is not a home away from home—the Market is home. Osborn began work as a “cleanup kid” at Pike Place when he was just 14 years old. Now, four decades later, he’s the heart and soul of Sosio’s seven days a week. “I wake up in the morning and I’m excited to go to work,” says Osborn. “[The Market has] helped me grow. It’s molded my personality. It’s my social life.” Established in 1943, Sosio’s has become a Market staple, and Osborn a community fixture—after 24 years at the produce stand, he has been co-owner for the last seven.

Known for his outgoing personality, Osborn has built his life on relationships—particularly at the Market. He spends each busy day educating customers about the diversity of fresh fruits and vegetables for sale at Sosio’s and he welcomes every opportunity to find the perfect product to delight his patrons—many of whom have become friends. He prides himself on taking customer service beyond the basic transaction and, throughout the years, has built strong ties with growers and suppliers, attended the weddings of fellow vendors, employed family members, and watched Market kids grow up. “I’m not just there taking people’s money. I want people to feel like it’s part of their standing,” Osborn explains. And one cannot overlook the sheer number of customers he interacts with daily. “We sell almost 100,000 pounds of peaches every summer. … It’s a sprint,” he says. 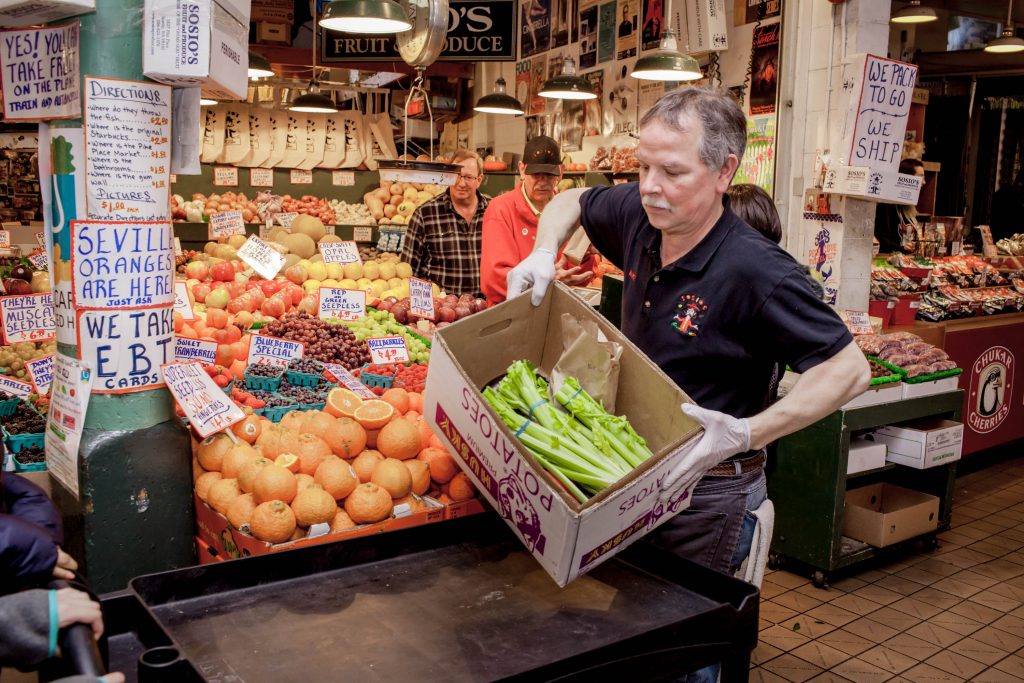 Like so many merchants at Pike Place, Osborn thrives in the Market’s bustling community and makes it a priority to give back. One way he does this is by hosting five tables at the annual Sunset Supper at Pike Place Market—a culinary showcase to benefit the Market Foundation’s mission to support housing, healthcare, healthy food, childcare and a community of support to its most vulnerable neighbors in and around the Market.“Last year I brought about two tables of family and friends and three tables of regular customers. I bring them as a ‘thank you’ for supporting me in the Market over the years,” explains Osborn. His tickets add up to a sizeable annual donation to the Market Foundation.

Representatives and volunteers from the Pike Market Food Bank stop at Sosio’s daily to collect a generous assortment of food donations. “Mike is very discriminating when it comes to the produce that he makes available at his stand. And when still beautiful and incredibly tasty produce fails to meet his high standards, he shares it with the Food Bank,” explains Food Bank manager Brian Anderson. Osborn often donates thousands of pounds of produce in a single month.

Meanwhile, in another part of the Market, Olga Sagan oversees Piroshky Piroshky, the traditional old-world Russian-style bakery that occupies a cozy 350-square-foot space and has a long history of mutual support with the Market community. 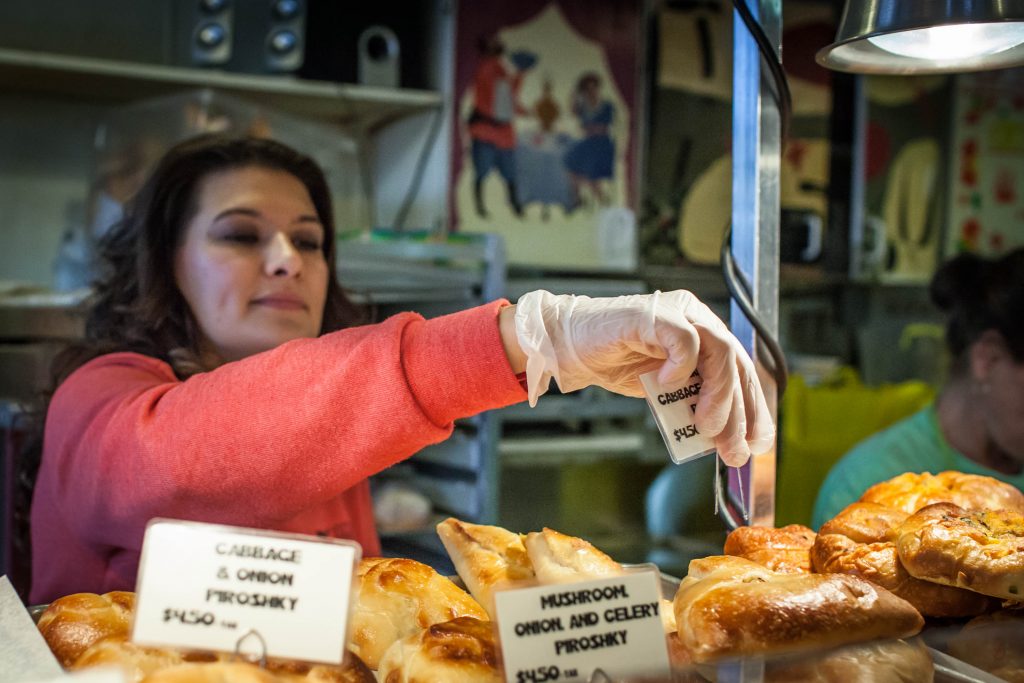 When Vladimir and Zina Kotelnikov opened Piroshky Piroshky in Pike Place Market in 1992, the couple had just immigrated from Russia, and in their late 40s, faced a new life in a new country. At the time, Sagan recalls, “the biggest supporters were the Market vendors and recent immigrant community.” On the night before the bakery’s grand opening, an anonymous Market merchant slipped a donation under the Kotelnikov’s door. The couple used the $1,000 to help pay for flour and other supplies.

For more than two decades, Piroshky Piroshky has cultivated a remarkable following in the Market, and three years ago expanded to three additional locations throughout Seattle. The Kotelnikovs passed down their classic Russian piroshky recipes, along with the responsibility to give back to the community that bolstered the bakery from the start. Piroshky Piroshky donates daily to the Pike Market Food Bank and contributes to the Market Community Safety Net—a relief fund to support those who fall on hard times and need a helping hand. 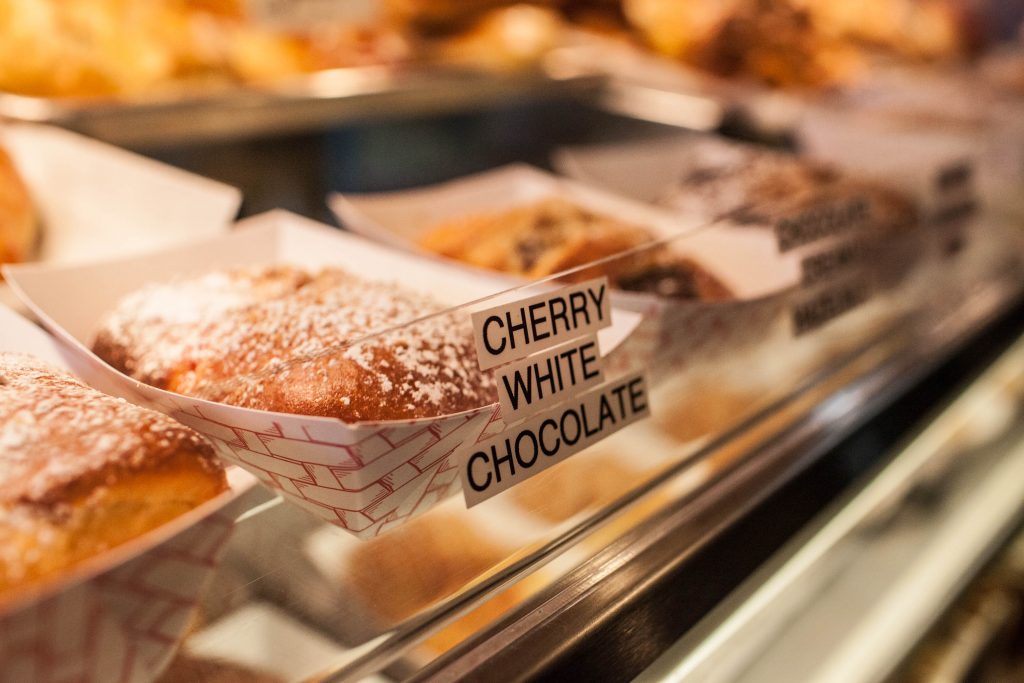 And Sagan recently devised another way to support her fellow Market merchants: Piroshky Piroshky now features artwork by Pike Place artists on all its packaging. With previous artwork by Sally Simmons, Angela Mraz, and Scott Lantz, Sagan’s crowd-sourced project relies on bakery customers and the Market community to choose each featured artist. “We think local art and piroshky goes together well,” Sagan says with a smile. “All you need is coffee.”

Although the merchants’ means of support vary, whether it’s fostering relationships, donating money and food, providing exceptional customer service, or celebrating one another’s success, the Market’s charm and prosperity hinges on the constant reciprocity and generosity of the people of Pike Place—people like Sagan and Osborn and hundreds of other vendors who have made the Market their home.

For Osborn, after 44 years in the Market, Pike Place is like a big family. “The Market is so unique. It’s its own city, its own community. We’re like a bunch of brothers and sisters,” Osborn says. “[After my first year at Pike Place] there was absolutely no doubt in my mind that I’d be in the Market for the rest of my life.” 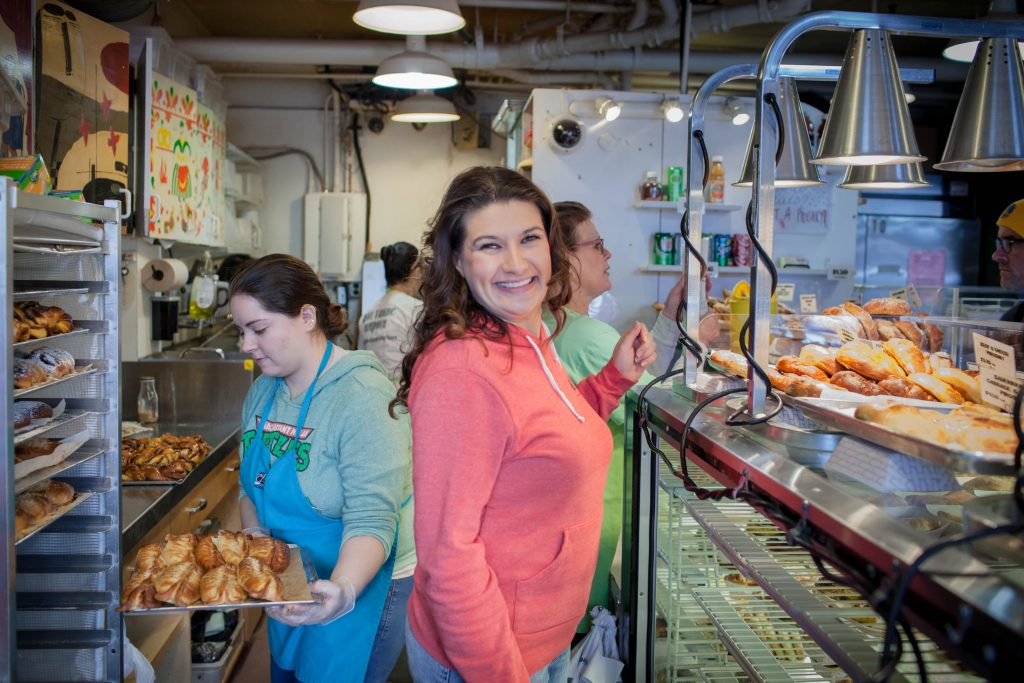 Help grow the Market you love and be part of Market history by writing your family name into Pike Place Market at PikeUp.org.

This story was written by Talia Shapiro and published by Seattle Weekly. The beautiful photographs are thanks to Rosemary Dai Ross. Story originally published here.