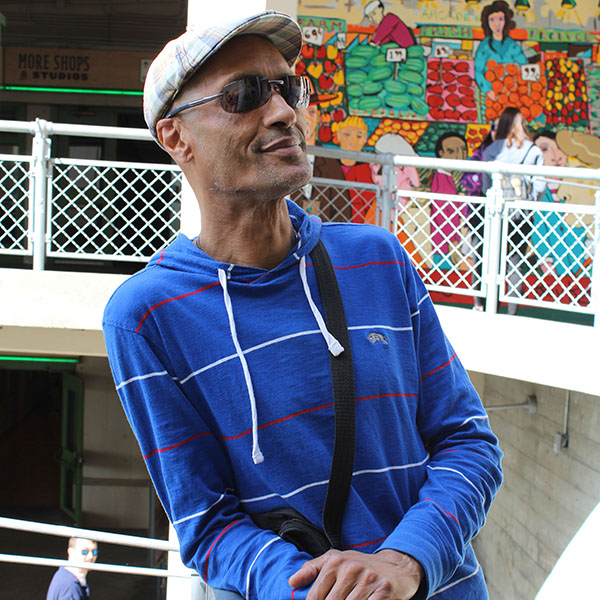 When the Community Safety Net helped Gene pay his security deposit and first month’s rent to help him move into housing he had been homeless for five years. A traffic accident had left him with debilitating dental injuries that left him struggling to get by. His dental work was suspended until he found a place to live, but without the ability to speak clearly and in crippling pain working was impossible. He was left without many options – hoping to land one of the few low-income housing options available to him in Seattle.

That was when he discovered the Pike Market Senior Center, a safe place to hang out and get a meal. He also met Mark, one of the Senior Center’s social workers, who helped him get his application into Seattle Housing and settle a dispute he was having with his previous residence. Not content to sit around all day he began volunteering at the Pike Market Food Bank where he met Food Bank Director, Brian Anderson. Brian changed his life. He acted as a mentor to Gene – encouraging him to be patient and providing good guidance and counseling.

Gene discovered a passion for distributing food to those who needed it. Not only did he put in countless hours at the Pike Market Food Bank, but he also began to volunteer at Community Lunch on Capitol Hill with Don Jensen, who quickly became his second mentor. When Brian left the Food Bank earlier this year to become the Coordinator of Intergenerational Ministries his work brought him in contact with Community Lunch! For Gene the collaboration has become a dream come true – he now has both his mentors working with him to help feed those who need it the most.

Gene was on the Seattle Housing waiting list for two and a half years before he was accepted into housing. When he finally got the call to move in, the Community Safety Net helped him get his foot in the door. He is still settling into his new apartment at The Belltower near the Market, and he continues to volunteer and give back to his community.