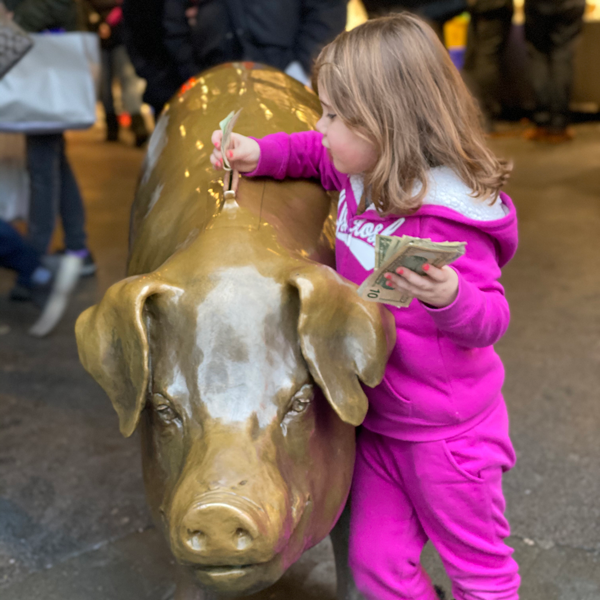 Five-year-old Charley Paisley Lahmeyer loves unicorns, dress up and baking. But, unlike other kids her age, she started her own fundraiser at Pike Place Market to help provide food for families who can’t afford it.

Following in her mom’s footsteps – Rayana White, Market artist and owner of WithTheRain – Charley’s getting crafty. Charley’s craft is making beaded necklaces and selling them for donations at Market events to raise funds to feed Rachel the Piggy Bank.

Over the past year, Charley has dropped $749.87 in Rachel’s belly and she’s still going! Charley was inspired to action through a food drive in her classroom at Pike Market Child Care and Preschool. It was there that she learned about the thousands of families and neighbors can’t afford to buy food every week. She wanted to find more ways to help.

Charley’s no stranger to the love and care of the Market community. “She was raised by the Market,” said her mom Rayana. “I had Market aunts, uncles and grandmas who all pitched in to help.” Yet once Charley started walking and talking, it became increasingly more difficult to work and parent at the same time.

Soon after, the Market preschool called to say they had an opening for Charley and offered a sliding scale tuition to keep it affordable for Charley’s parents.

All of her hard work has led Charley to be inducted into this year’s 12 Under Twelve by King 5 Evening News! Our hearts are filled with joy knowing that families like Charley and her mom Rayana are out there to represent and fundraise for this thriving Market community.