THIS LITTLE PIGGY WENT TO THE MARKET…

Rachel and Billie are the Pike Place Market Foundation’s life-size bronze piggybanks, and they “bring home the bacon” in support of the Market community!

In 2011, Rachel was joined at the Market by her ‘cousin’, Billie. Each year, these porcine princesses collect around $20,000 in currency from around the world — and they’ve raised more than $350,000 in their bronze lifetimes! Rachel the Piggy Bank gets her name and look from a real pig named Rachel – a 770-pound behemoth and the 1985 prize-winning pig at the Whidbey Island County Fair. Rachel was a neighbor of sculptor Georgia Gerber, which led to the design behind Rachel the Piggy Bank’s sculpture. “There was this huge neighborhood pig just down the road from us on the island,” says Georgia. “She was a well-known family pet and my inspiration for Rachel.” The unveiling of Rachel in 1986

Rachel has been the constant connection between the community mission of the Pike Place Market Foundation and the millions of Market visitors for over 30 years.  She serves as landmark, model, mascot and inspiration.

On the evening of February 2011, Rachel the Piggy Bank stood bravely against an out-of-control taxicab. She was knocked off her base and suffered a large crack and sizable dent, but she held her ground enough to stop the cab from toppling the support beam that holds the Market pergola. Sculptor Georgia Gerber brought our wounded mascot back to the island for some R&R and repair. Rachel’s triumphant return came with a surprise guest – a gorgeous second bronze piggy bank in tow named Billie! Billie flies to the new MarketFront in 2016

Next time you visit Pike Place Market, insert a few coins and show your support for the Market community!

Donate to keep the Market strong! Why are there pigs at Pike Place Market?

The bronze pigs at Pike Place Market are more than just recognizable mascots, they are real working piggy banks that collect $20,000 every year for the social services in the Market. Maintained by the Pike Place Market Foundation, Rachel and her cousin Billie fundraise to support our mission of nurturing a thriving market community.

Where is Rachel the Piggy Bank?

Rachel can be found underneath the famous clock and sign at Pike Place Market, at the corner of Pike Place and Pike Street, Seattle WA.

Where is Billie the Piggy Bank?

In 2016, Billie proved that pigs CAN fly! She received her big moment in the spotlight when she took flight via a construction crane to make her new home on the MarketFront Plaza on the Pike Place Market expansion. Billie stands proudly there today to welcome new and old friends to Pike Place Market – and to help her famous cousin raise funds for the social services at Pike Place Market!

Are there other Pike Place Market piggy banks?

In 2001 and 2007, Seattle bore witness to the Pigs on Parade campaigns – nearly 300 fully-decorated life-size pig sculptures were created, each a replica of Rachel or Billie. Read more on our blog.

Most recently in 2022, we called some of the pigs home for the Market Foundation’s 40th birthday. 40 pigs from all over the region reunited on the cobblestones for a dazzling celebration and Pig Pageant.

Some of the art pigs also adorn the Market’s rooftop during the holidays, as swinedeer, and a keen eye will spot two others in the Market: Clockwork, above the awning at the Sanitary Market; and Pork & Beans, who lives inside just above the front door inside Starbucks. 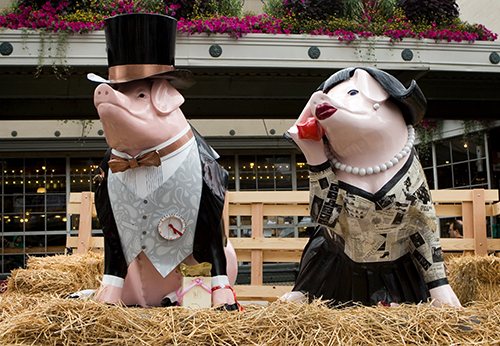 “Pigs on Parade”: A Hog-Wild History

For the Pike Place Market Foundation’s 40th birthday in 2022, we brought back 40 larger-than-life fiberglass pigs from our 2001 and 2007 “Pigs on Parade” fundraisers!

If you were in Seattle during these years, you might remember the dozens of artistic piggies that lined the Seattle streets and delighted tourists and locals alike in the Market Foundation’s most memorable campaigns yet. Learn more about “Pigs on Parade”, and the 300 phenomenal art pigs created by local artists!