Pigs on Parade: a Hog-Wild History 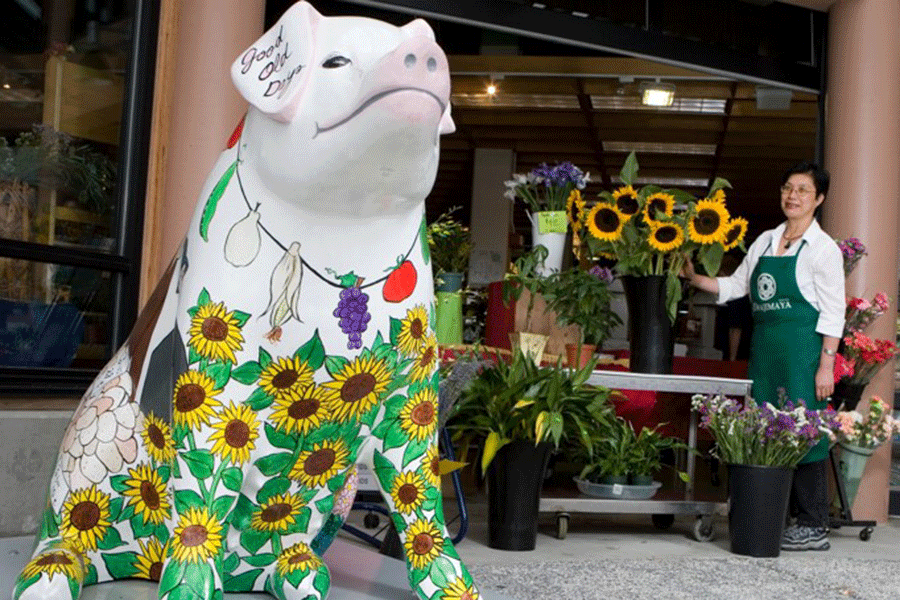 Have you heard the news?! In honor of the Pike Place Market Foundation’s 40th birthday, we are bringing 40 larger-than-life fiberglass pigs from our 2001 and 2007 “Pigs on Parade” back to Pike Place!

If you were in Seattle during these years, you might remember the dozens of artistic piggies that lined the Seattle streets and delighted tourists and locals alike in the Market Foundation’s most memorable campaigns yet.  After their respective Pig Parades, the pigs were auctioned off and spent the last 15-20 years in loving homes: on board members’ balconies, in donors’ gardens, and even as far away as Alaska and Paris. Now, these porcine pals are traveling back to the cobblestones and preparing to go “hog wild” in their triumphant return to Pike Place Market.

In preparation for the glorious Pig Pageant on Saturday, October 29th, we’re looking back at the original 2001 and 2007 “Pigs on Parade” campaigns and searching for answers: Who came up with this idea in the first place? How does one parade 100+ giant fiberglass pigs down the bumpy Market cobblestones? And just why are people so magnetically drawn to these pigs?! 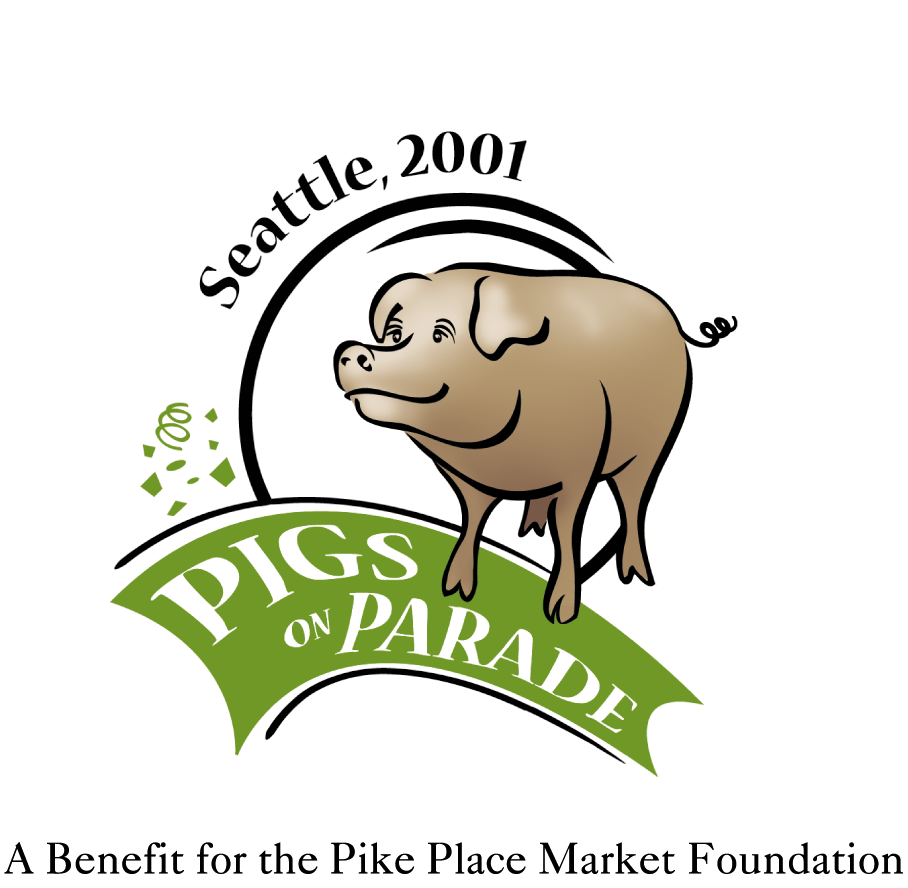 Back at the dawn of the new millennium, Market Foundation board president Mike Kelly had just visited Chicago, where large art cows were on display across the city. Mike thought the Market Foundation could do a similar flashy display based on our mascot: Rachel the Piggy Bank. Though there was an official company mounting these campaigns all across the country with different animals, the Market Foundation staff and board of directors wanted to figure out how to do it themselves and auction off the pigs to raise money for the Market’s social service agencies. How hard could it be?!

When you mention “Pigs on Parade” to Marlys Erickson, former Executive Director of the Market Foundation, she raises her eyebrows and gives the all-knowing look of someone who has spent countless hours troubleshooting and mounting these campaigns of epic pig-portions. “Well, just look at all that we did!” she says. “First, we had to get Georgia (Rachel the Piggy Bank’s sculptor) to create a model – two new bronze pigs.”  These bronze originals were cast in molds, and over 200 fiberglass models were created. 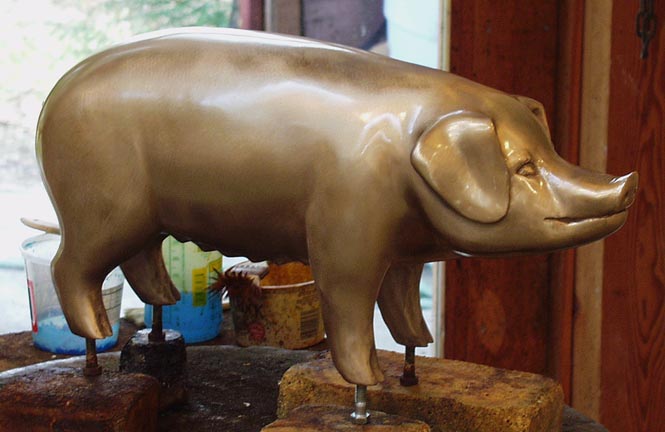 The new bronze Rachel from which the fiberglass models were made.

“It was like going into five new lines of business in one year,” remembers Chris Hurley, Marlys’ partner and former Executive Director of the Pike Market Clinic. “They published a book, a calendar, learned how to sell on Amazon, threw a parade in Downtown Seattle.” So many incredible things! But we’re getting ahead of ourselves… 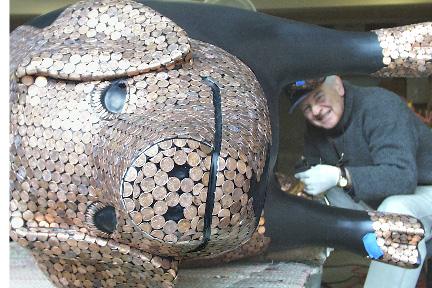 “Penny The Inside Out Pig” in process.

“The bidding process and selection of the artists was very legit,” remembers Chris. The Market Foundation invited artists across the region to submit their concepts, and boy, did the creative community of Seattle pull out all of the stops with wildly sty-lish and inventive designs!  “We reviewed artists thoroughly to ensure they had studios and could do what they said they wanted to do,” said Marlys.

Artists had a few months with their fiberglass pigs to complete the project. The Market Foundation paid for the artists’ time, and recruited pig sponsors that paid the reimbursement for art materials. “The very first time around, it was really, really hard to get sponsors,” recalls Marlys. “Nobody had any idea what we’re talking about, until we got one pig done (“April Showers”) and got it in Westlake Park. And then everybody got excited and understood.”

With companies and organizations stepping up to sponsor pigs and artists hard at work on the creations, the pigs were truly coming to life. 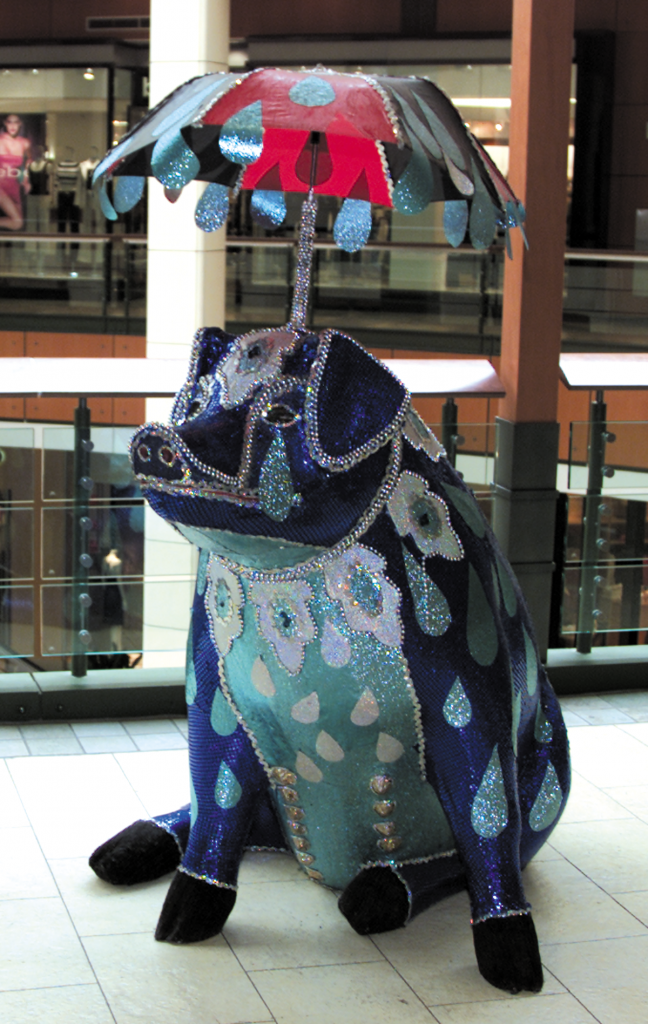 But then the 170 pigs had to be moved. “We knew an engineer who had retired from Boeing, he recruited this team of seven engineers who had worked on the lunar landing,” says Marlys. “They figured how many pigs would fit on a truck, they developed these ‘skateboards’ so that the pigs could be easily moved.” That’s one small step for man, and one giant leap for getting this Pig Parade up and running.

Chris remembers a “transcendent experience” from this time, when she was a volunteer driver carting pigs around town. The flatbed truck driving in front of her was carrying “Ruby”, the Dale Chihuly pig creation covered in hundreds of red glass reflectors. “We were on I-5 in one of the little tunnels by the convention center, and it was as if I had been transported into this unbelievable red reflector,” said Chris. “The light hit Ruby’s glass and reflected against the tiles in the tunnel. It’s still one of the great visuals I have of that time period.”

On Memorial Day 2001, the pigs made their march from Pike Place Market to Westlake Park in a grand parade event attended by 10,000 people. Locals and tourists alike lined the streets, excited to get a glimpse of the fabulous fiberglass creations and celebrate our favorite local legend: the Market’s beloved piggy bank. 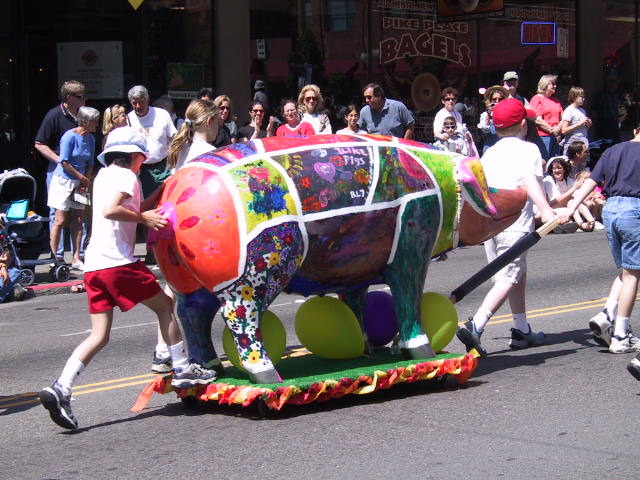 Finally, after strutting their stuff and capturing the hearts of Seattle, it was time for each pig to find their new loving home. A select number were auctioned off in person at an event held at the Convention Center, while the rest were auctioned online: quite cutting-edge for 2001. “We auctioned them off on eBay, which was very new at the time,” says Marlys. “Nobody knew how to use it, but we figured out how.”

Supporters were thrilled to get their hands on these fabulous pigs, and people far and wide staked their claim in support of the Market community. “One of them went to Moscow, one went to Paris,” recalls Marlys. “We had to figure out the process for shipping something to Moscow. The pig had to be cut in half.”

With all 170 pigs scattered to the winds and in new loving homes, the Parade finally came to an end. For the time being… 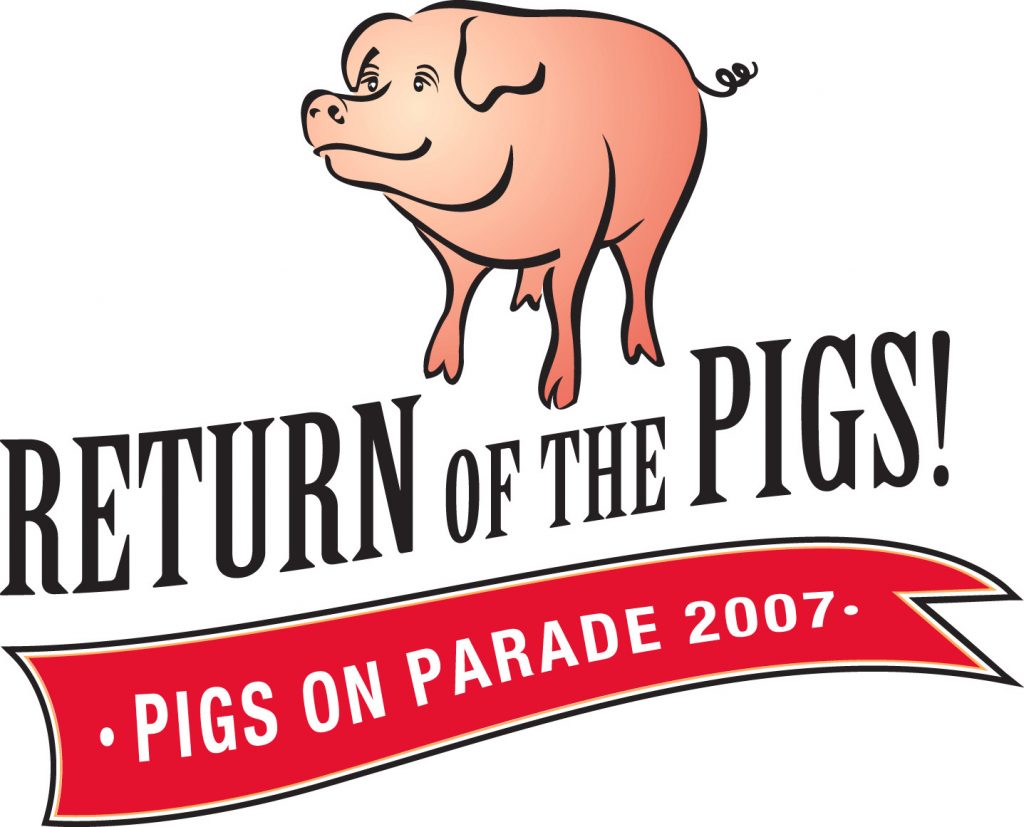 All was quiet on the pig front until 2007, when Pike Place Market was getting ready to turn 100 years old. The Market Foundation wanted to do something PIG, er, BIG to mark the occasion and inspire a renewed investment in the Market community. Time to bring back Pigs on Parade! 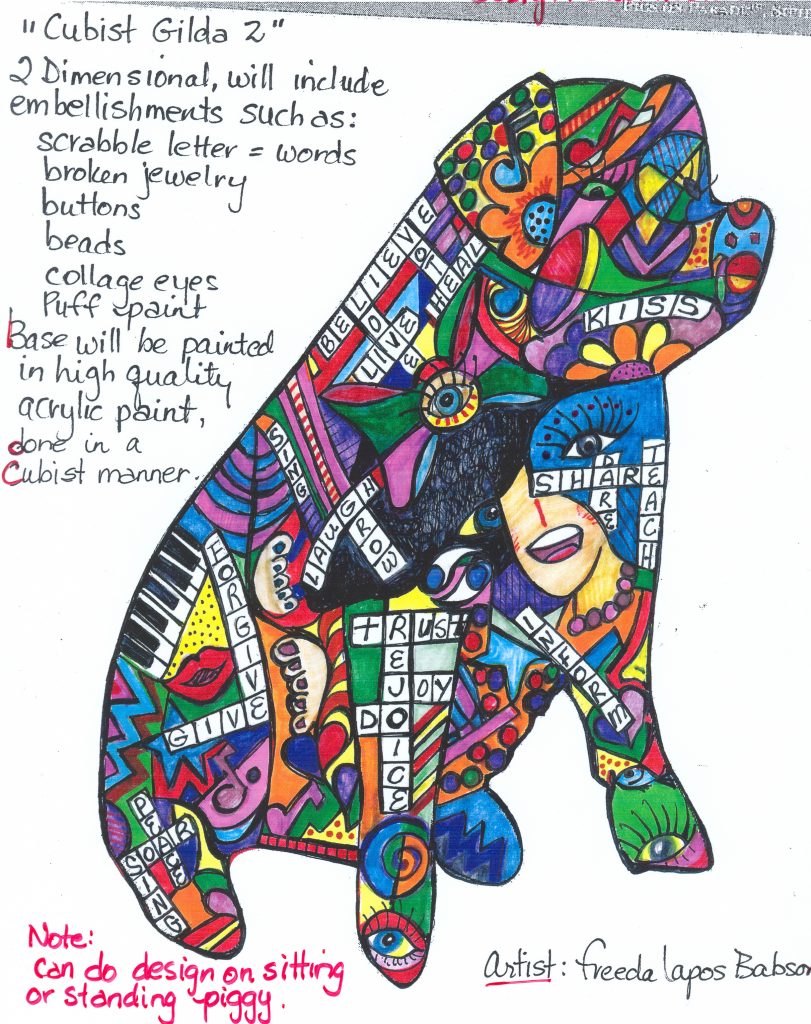 Once again, pigs were hogging downtown Seattle sidewalks all summer and getting folks excited about the Market.  Pig sponsor companies made gifts from $3,500 to $175,000  for the adornment and display of the 100 porcine wonders plus the genu-swine six-month long celebration of the Market’s first 100 years. 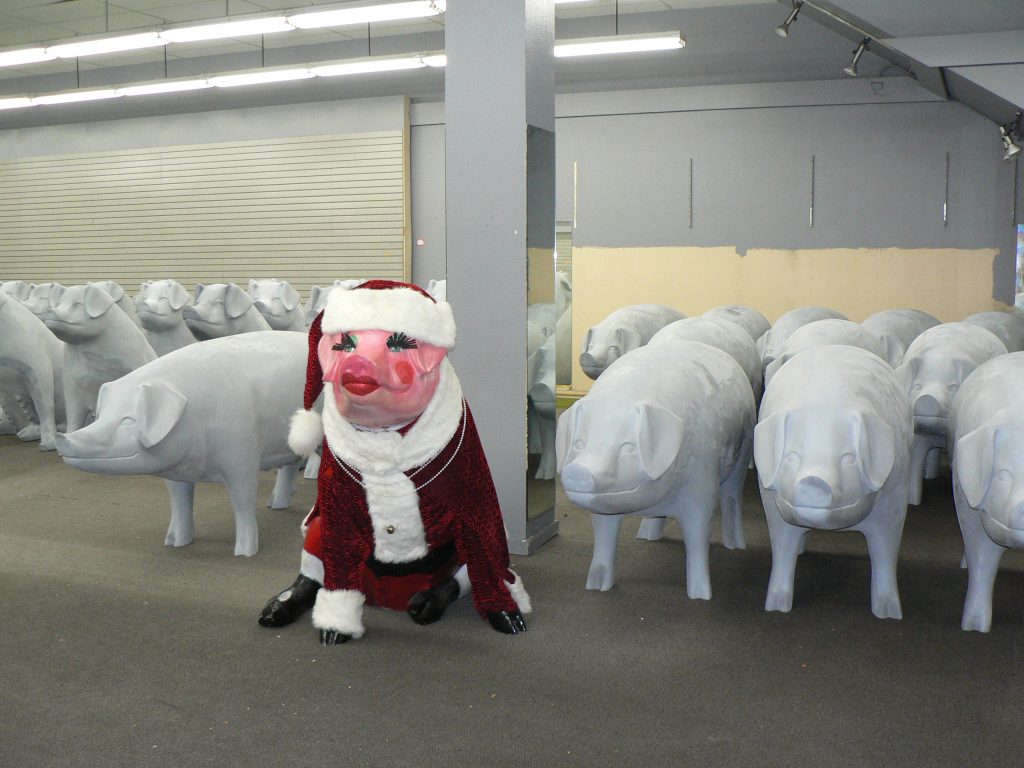 At the time, Pike Place Market was in desperate need of basic renovations such as new elevators and restrooms, seismic and electrical upgrades, heating and ventilation improvements and a rebuilt hill climb. The Pike Place Market Preservation and Development Authority (PDA) had identified a total need of around $70 million for the renovations. In partnership with the PDA, the Market Foundation began working behind the scenes to fundraise and introduce a levy proposal for the 2008 Seattle election. Both organizations knew that the centennial celebration would be a crucial moment to educate the public and remind Seattle why they loved the Market, in preparation for the levy to be introduced the following year. 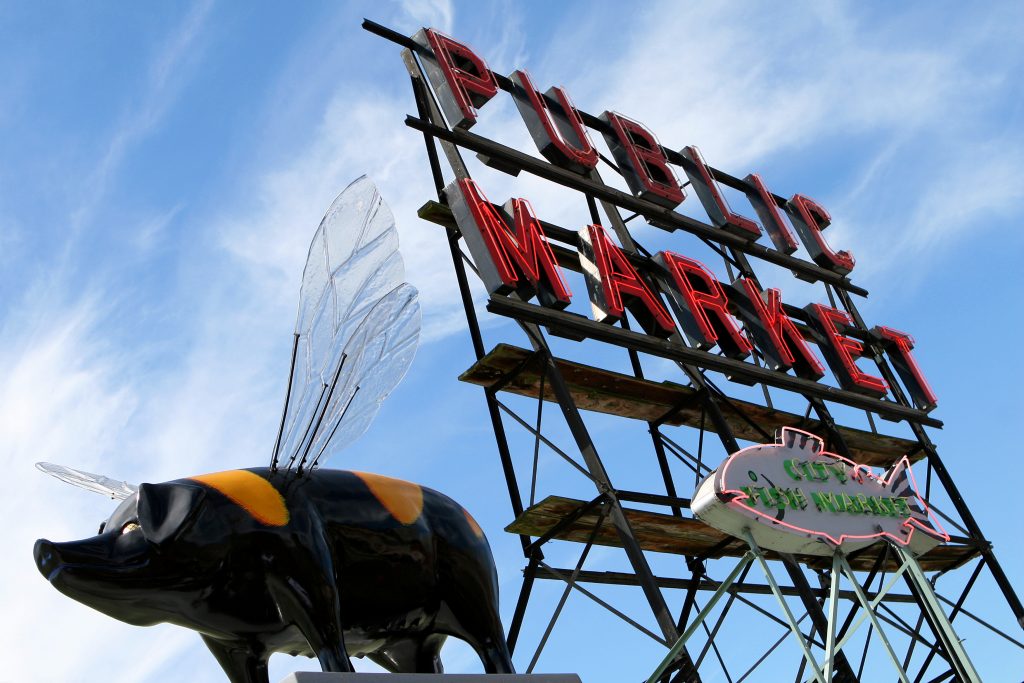 Mark says: “We brought back Pigs on Parade, which was, one, really fun. Number two, that was a big undertaking and raised a lot of money to fund the actual [Pike Place Market Centennial] celebration, which was a great party and again, allowed us to engage the community and lay the groundwork for the levy campaign.” 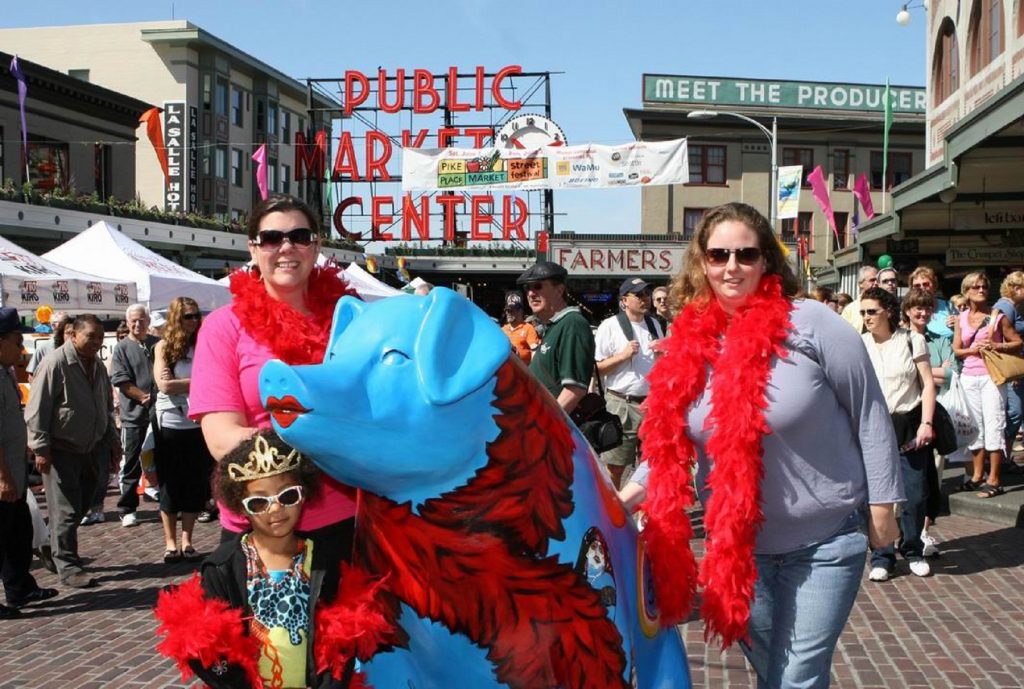 The 2007 Pigs on Parade officially kicked off with a fabulous parade, including 80 pigs, their handlers, and a humongous pig balloon float.  Each pig was creatively outfitted by a local artist and cavorted from Westlake Park to the Market, ending at the Centennial Street Festival.

“Hundreds of people went on searches to find all the pigs and photo themselves with them,” remembers Marlys. “And about 10,000 people showed up when we did parades of all the pigs in May 2007. So, maybe the biggest thing was that they made people laugh.”

All summer, the Market had booths at neighborhood festivals – the U District, Folklife, Juneteenth, Fremont, Pride, Wallingford and Chinatown-International District, to name a few – while the pig float appeared in various parades, even winning a first place prize at the West Seattle Parade.

Now, 21 years after the first fiberglass hogs hit the Seattle streets, we are excited to welcome the pigs home in celebration of the Market Foundation’s 40th Birthday. Though many things have changed throughout the Foundation’s history, our commitment to the Market community remains, and so does Seattle’s love of piggy banks!

We are thrilled that Rachel, Billie, and the Pigs on Parade pigs have continued to delight after all these years, giving visitors an opportunity to directly engage with supporting the Market’s social services.

Make sure to join us on Saturday, October 29th at the Harvest Festival at Pike Place Market, where 40 of the famous fiberglass pigs will be lining the Market cobblestones in a dazzling display of creativity, community and piggy banks! Pig fans far and wide will have a chance to vote by donation in a Pig Pageant to cheer for their favorite pig and support the Pike Place Market Foundation. All voters will be entered for a chance to win up to $8,000 in amazing prizes from the Market’s very own Sur la Table!

Not able to join us in person? You can vote for your favorite pig online! Visit our online pig pageant gallery to peruse these porcine pals, and make sure to donate by midnight on October 31 to be entered.

JOIN US AS WE CELEBRATE THE MARKET FOUNDATION’S IMPACT OF $40 MILLION IN 40 YEARS INVESTED INTO THE MARKET COMMUNITY!